Raptoreum is looking to offer a secure and economically sustainable framework for the management and trading real assets. No other project combines common programming languages, a node layer handing assets and contracts separate from the main chain but still secured by it. Raptoreum is a 51% resistant blockchain that offers programming smart contracts in common programming languages like Python and JAVA. As already mentioned, it is ASICs and FPGA resistant. This new blockchain offers a lot.

The team behind Raptoreum is interesting. Seven dudes who did not reveal themself publicly. You can read more about them on the Raptoreum website. But together as a team, they have over 1000 years of experience regarding new technologies, programming, blockchain; at least that’s what they claim. According to Github, they were very active in February, and today primarily GitHub member npq7721 is contributing to the projects. Maybe that’s their main account; who knows since they want to stay anonymous. Being anonymous has some problems like if they rug pull, we don’t know who is responsible. But I think this will not happen since they would not spend so much time doing a simple rug pull. Also, the biggest crypto coin was created by an anonymous person, Satoshi Nakamoto. Still knowing who are the people behind the coin would be better, but maybe these guys decide to reveal themself in the future, but for now, I need to rate this lower than usual.

The team has managed to release the mainnet and everything needed for the project to move forward. You can trade RTM using some weird exchanges, but every coin needs to start somewhere. Also, the roadmap is clear, and we can only expect great things from this project.

Tokenomics is not bad. The total supply is 21 Billion, but it will take up to 20 years to mine all of that. There was no pre-mine, so nobody will dump tons of coins on your head if you decide to invest. The team is funding the project with devfee, which is a small percentage from each block.

The community is great except for discord. I warn you; weird people run the Raptoreum discord channel. Lots of memes, general chit chat almost about everything else except Raptoreum is going there. Also, a bit unique YouTube channel adds to the confusion. I suggest sticking to the Bitcointalk forum and other more serious communities.

Donations are not needed, I can pay for the server, that’s not a problem. But if you do donate I appreciate it and will for sure stay motivated to share all my findings of projects I research. Also, I have added a new rating, donations rating which will prove how likely people are prone to tipping, donating a specific coin and how active is the coin’s community.

Raptoreum is a project that merges Raven and Ethereum, and the result from that is Raptoreum. The team behind Raptoreum is small and consists of only five members. Raptoreum is a hybrid blockchain that uses proof of stake and proof of work mechanics. Its goal is to drive mass adoption and positive global exchange, whatever that means.

This hybrid blockchain is open source-based and aims to provide a tokenization platform while allowing the DAPPS to work with smart contracts executed on the node level.

Raptoreum is not new, it was founded in 2018, but the genesis block was created in February 2021. RTM hashing algorithm is called Ghostrider. Thanks to Ghostrider, ASIC and FPGA mining is obsolete. In return, that means a higher decentralization. 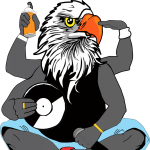 Thank you for subscribing.

The form collects name and email so that we can add you to our newsletter list for project updates. Checkout our privacy policy for the full story on how we protect and manage your submitted data!